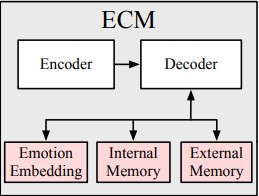 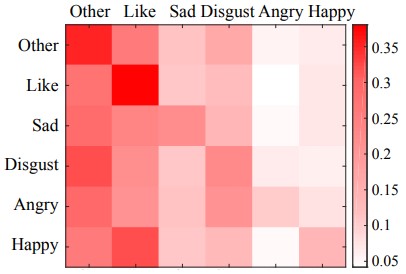 Letting a chatbot perceive and express emotion has been a standing goal of AI. We studied an interesting problem: given a post and an emotion category (happy, sad, like, angry, etc.), how can we generate a response that belongs to that emotion category? We proposed Emotional Chatting Machine (ECM), which is the first work that addresses the emotion factor in large-scale conversation generation. ECM can generate appropriate responses not only in content (relevant and grammatical) but also in emotion (emotionally consistent). Based on the encoder-decoder framework, we designed the internal memory and external memory for the neural network to inject the emotion information for the decoder. Experiments show that ECM can generate responses appropriate not only in content but also in emotion.

Our work was reported by MIT Technology Review, the Guardian, and NIVIDIA. 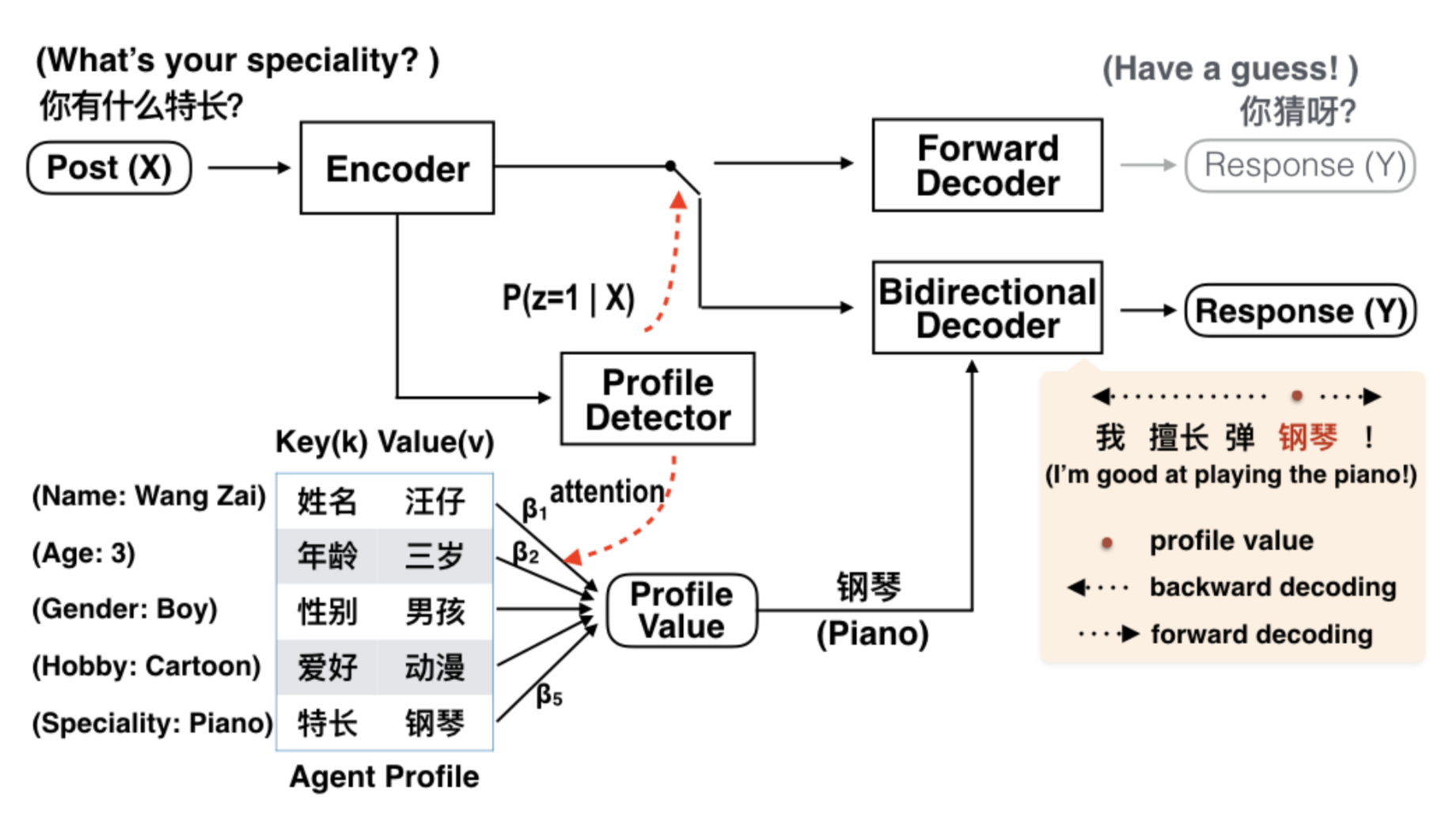 The lack of personality of a chatbot is one of the major obstacles that prevent a chatbot to pass the Turing Test. Endowing a chatbot with personality or an identity is quite challenging but critical to deliver more realistic and natural conversations. We studied a novel problem for explicit personalization: given a chatbot’s profile, how can we generate responses that are coherent to the given profile? This allows the system developer to control the profile/personality of a chatbot. We addressed the issue by designing a profile detector, a position detector and a bidirectional decoder on top of the original seq2seq model. Post-level and session-level evaluation shows that when giving a chatbot profile, our model can generate more coherent responses with more language variety. 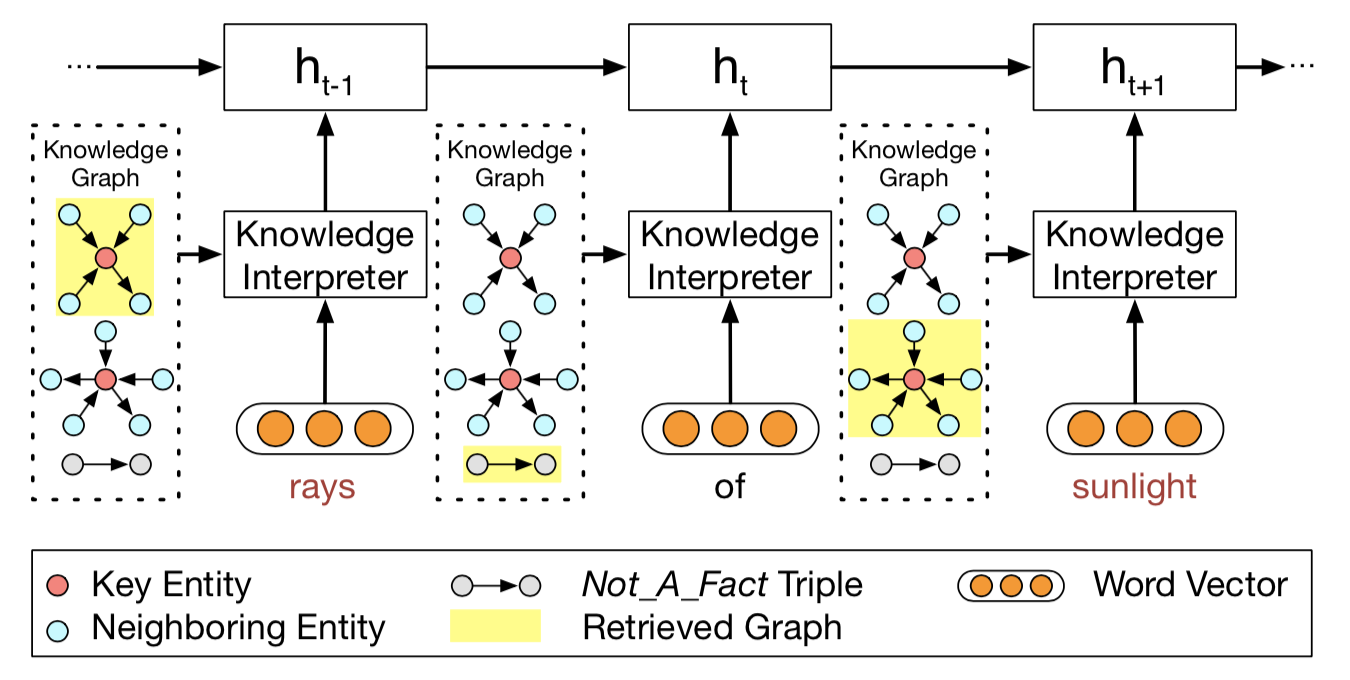 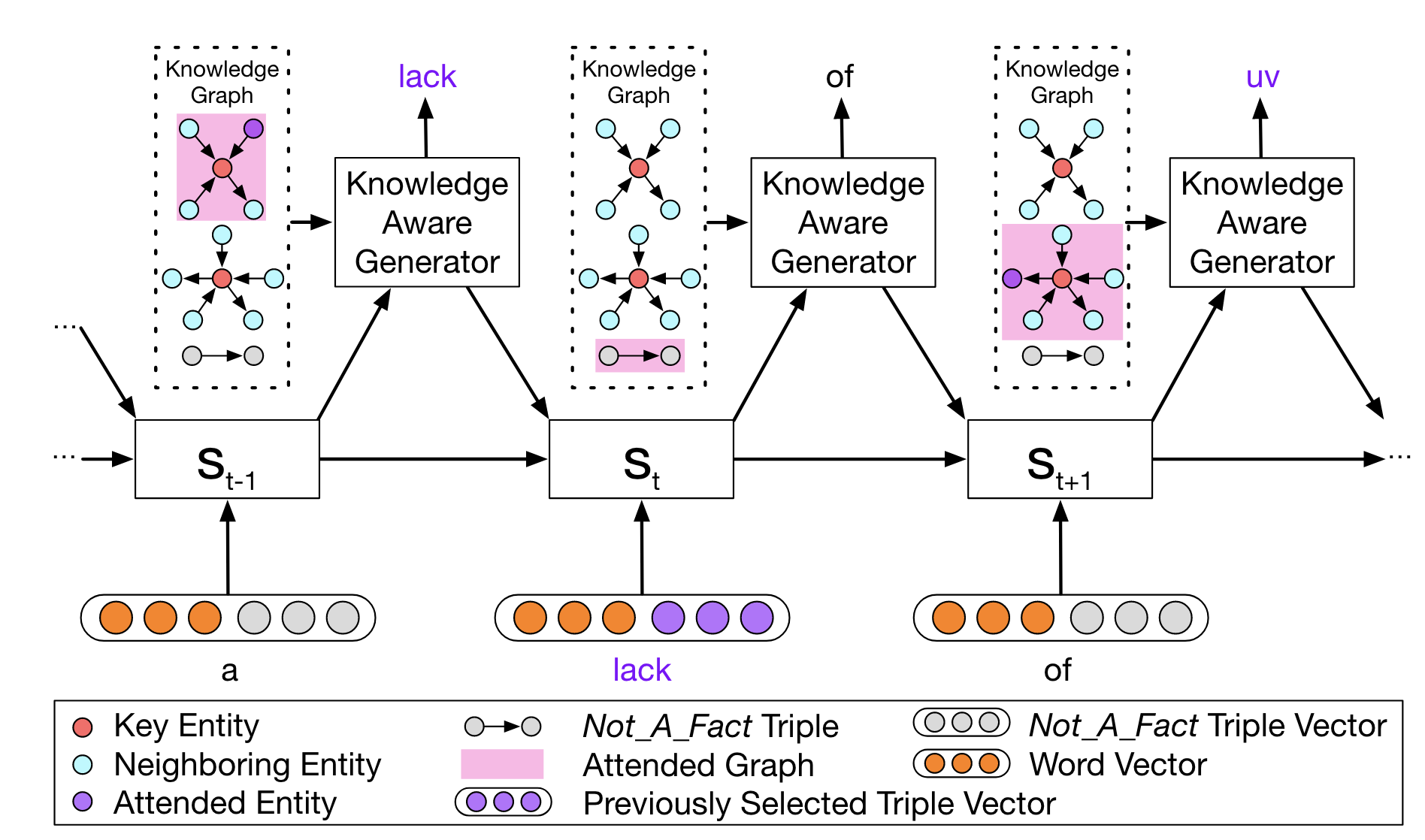 Semantic understanding, particularly when facilitated by commonsense knowledge or world facts, is essential to many natural language processing tasks, and undoubtedly, it is a key factor to the success of dialogue or conversational systems, as conversational interaction is a semantic activity. We proposed a novel open-domain conversation generation model to demonstrate how large-scale commonsense knowledge can facilitate language understanding and generation. We addressed the issue by designing two novel graph attention mechanisms: a static graph attention mechanism encodes the retrieved commonsense knowledge graphs for a post to augment the semantic representation of the post, which can help understand the post; a dynamic graph attention mechanism attentively reads the knowledge graphs and the triples in each graph, and then uses the semantic information from the graphs and triples for better response generation. Experiments show that the proposed model can generate more appropriate and informative responses than state-of-the-art baselines.

Our paper “Commonsense Knowledge Aware Conversation Generation with Graph Attention” was selected as IJCAI-ECAI 2018 distinguished papers out of the 710 accepted papers from 3480 submissions. 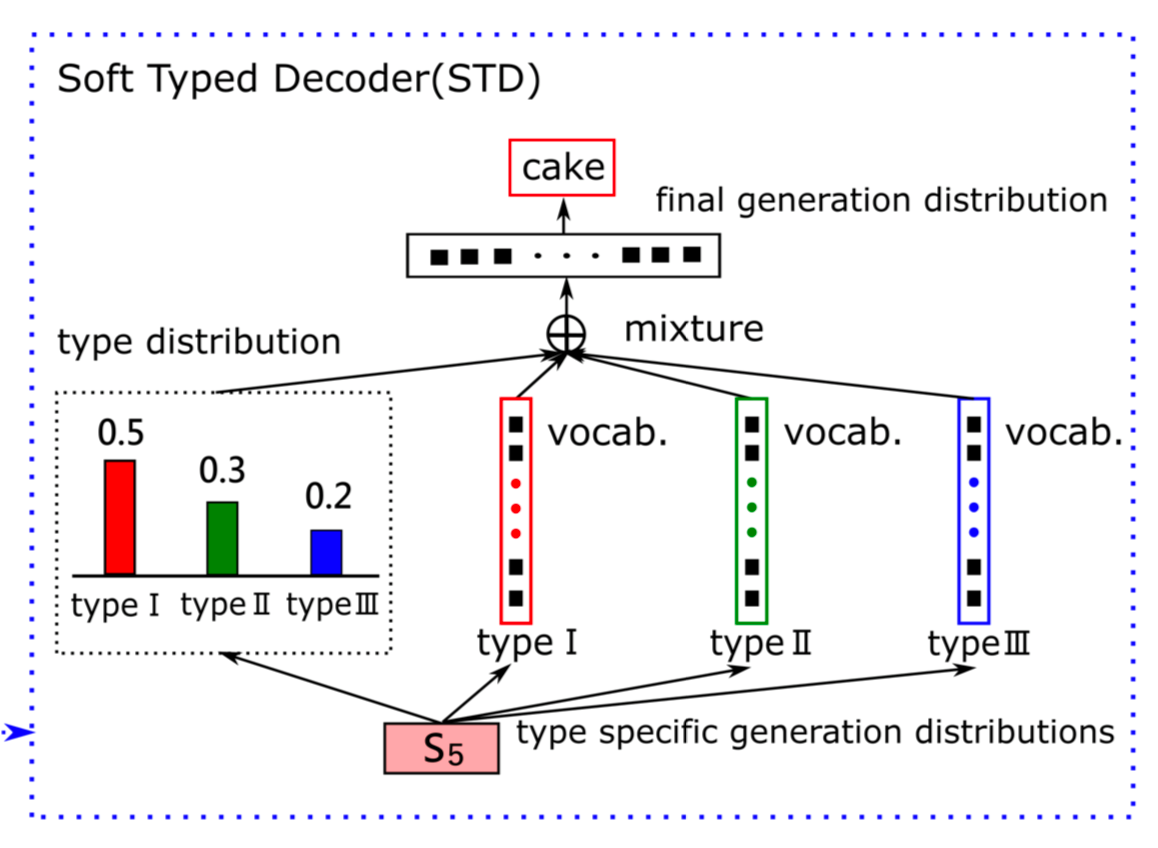 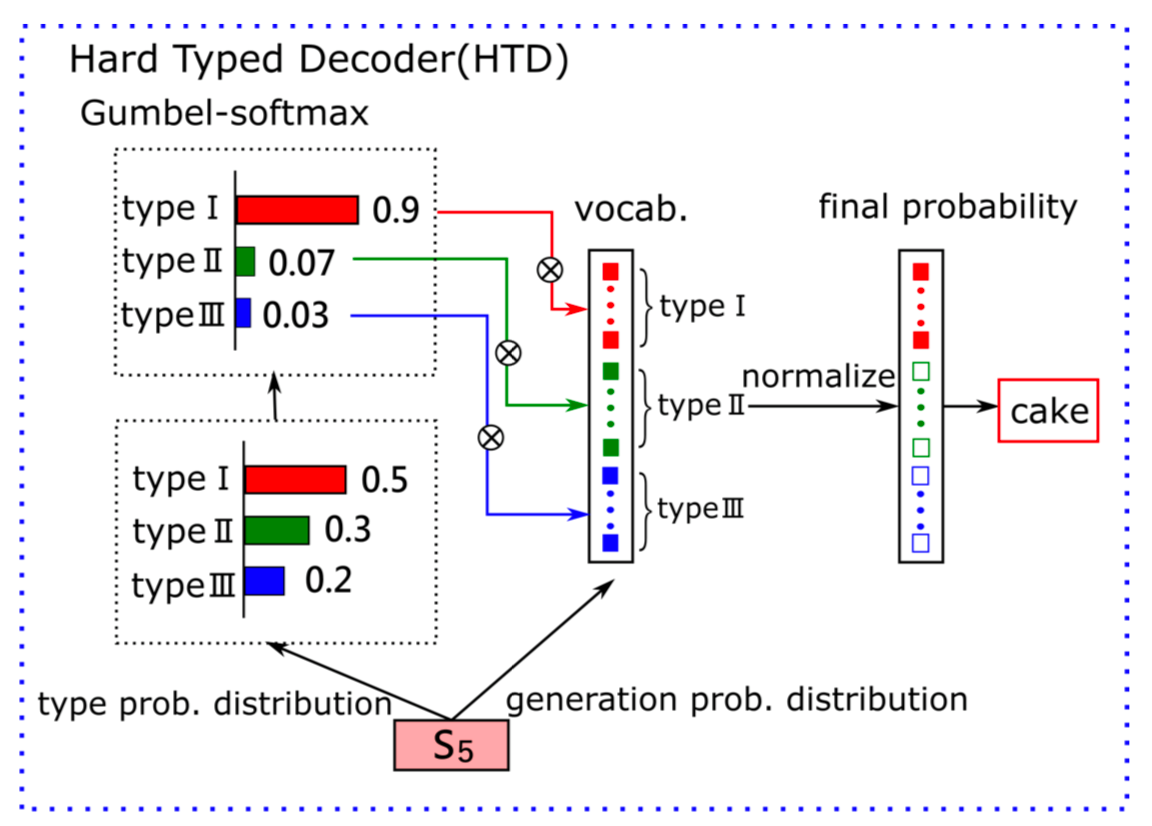 Learning to ask questions aims to generate a question to a given input. Deciding what to ask and how is a strong indicator of machine understanding. Asking good questions in large-scale open-domain conversational systems is quite significant yet rather less studied. We observe that a good question is a natural composition of interrogatives, topic words, and ordinary words. Interrogatives lexicalize the pattern of questioning, topic words address the key information for topic transition in dialogue, and ordinary words play syntactical and grammatical roles in making a natural sentence. We devise two typed decoders (soft typed decoder and hard typed decoder) in which a type distribution over the three types is estimated and used to modulate the final generation distribution. Extensive experiments show that the typed decoders outperform state-of-the-art baselines and can generate more meaningful questions. Users are more likely to respond to the questions generated by our decoders than to those by the baselines.

Sentiment classification, a major subtopic in sentiment analysis, aims to classify text to sentiment polarities such as positive or negative. 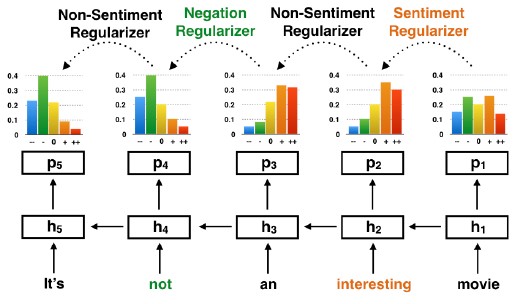 Reinforcement learning (RL) is a learning paradigm that allows an agent to learn through interactions with the environment. It has many interesting applications in game control, language processing, system operating, and robotics. 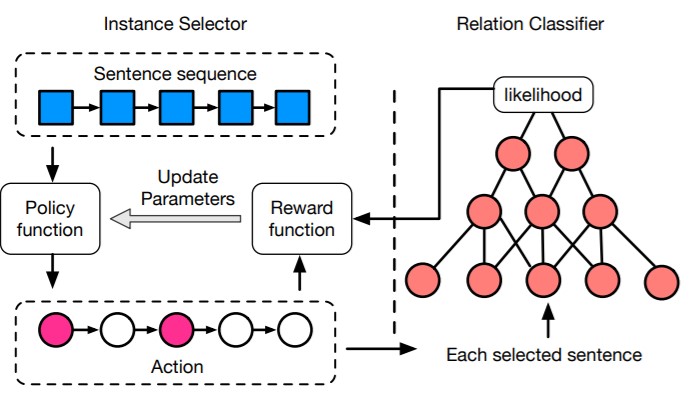 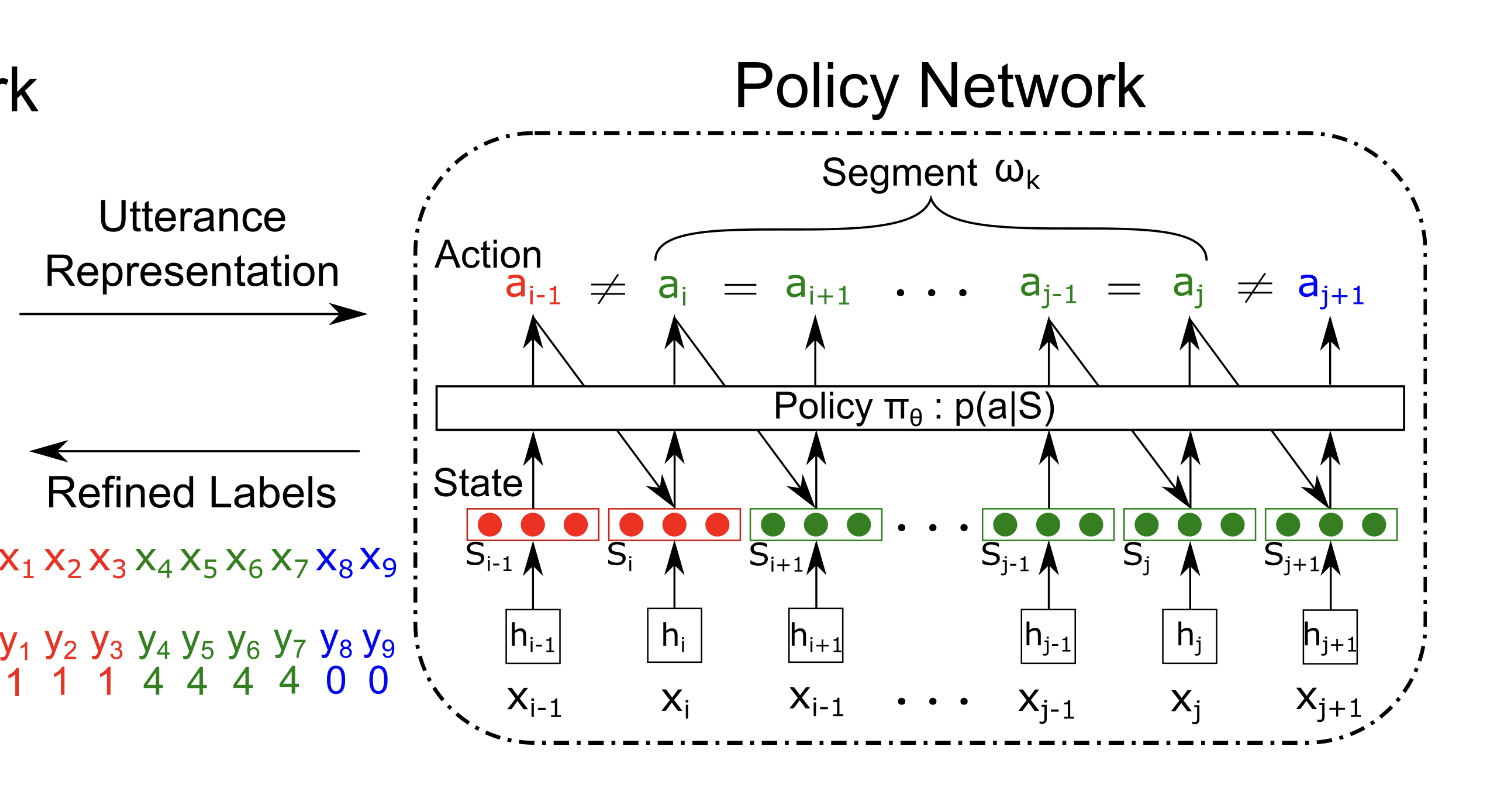 Topic structure analysis plays a pivotal role in dialogue understanding. We propose a reinforcement learning (RL) method for topic segmentation and labeling in goal-oriented dialogues, which is a weakly supervised method. First, a set of keywords are manually collected for each topic, and utterances are automatically labeled. Second, we pretrained a policy network on the noisy data. Third, the method iterates between refining data and refining policy by rewarding local topic continuity (the same topic lasts a few turns along the session) and global topic structure (once all local topic assignments are made, the content similarity between adjacent segments should be small, that within a segment should be large). 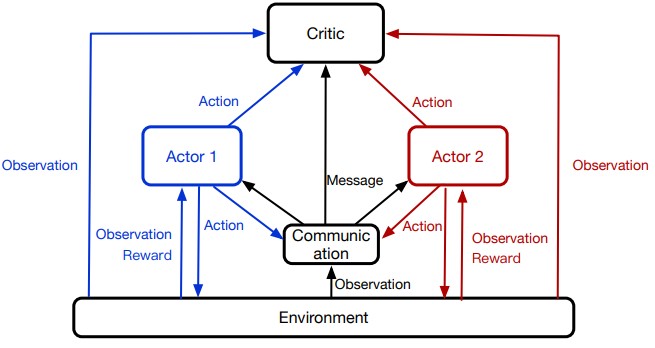 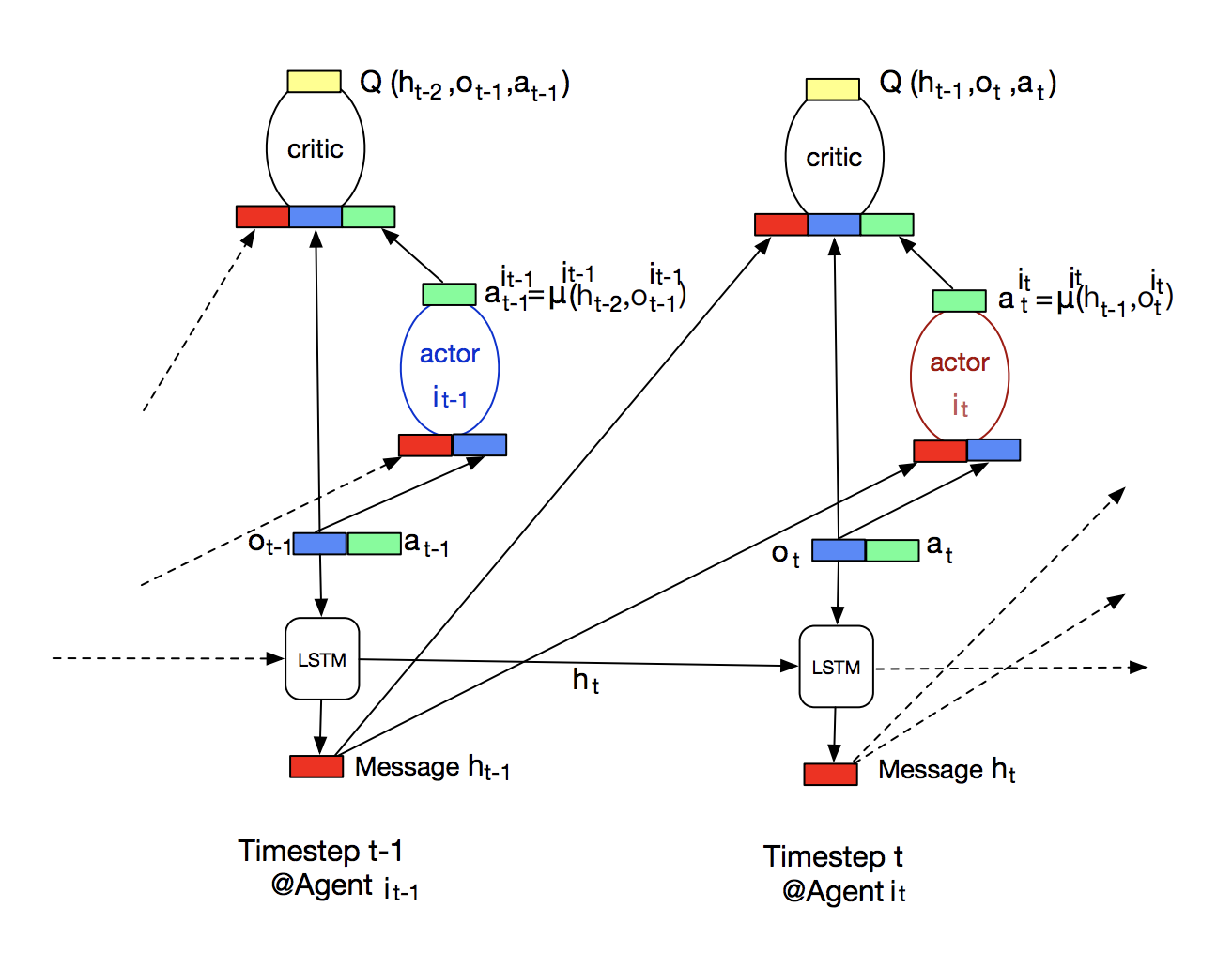 Ranking is a fundamental and widely studied problem in scenarios such as search, advertising, and recommendation. However, joint optimization for multi-scenario ranking systems, which aims to improve the overall performance of several ranking strategies in different scenarios, is rather untouched. We formulated multi-scenario ranking optimization as a fully cooperative, partially observable, multi-agent sequential decision problem. We proposed a novel model named Multi-Agent Recurrent Deterministic Policy Gradient (MA-RDPG) which has a communication component for passing messages, several private actors (agents) for making actions for ranking, and a centralized critic for evaluating the overall performance of the co-working actors. Each scenario is treated as an agent (actor). Agents collaborate with each other by sharing a global action-value function (the critic) and passing messages that encodes historical information across scenarios. The model is evaluated with online settings on a large E-commerce platform. Results show that the proposed model exhibits significant improvements against baselines in terms of the overall performance.

Story ending generation aims at concluding a story and completing the plot given a story context. We argue that solving this task involves addressing the following issues: 1) Representing the context clues which contain key information for planning a reasonable ending; and 2) Using implicit commonsense knowledge to facilitate understanding of the story and better predict what will happen next. To address the two issues, we devise a model that is equipped with an incremental encoding scheme to encode context clues effectively, and a multi-source attention mechanism to use commonsense knowledge. The representation of the context clues is built through incremental encoding of the sentences in the story context one by one. When encoding a current sentence in a story context, the model can attend not only to the words in the preceding sentence, but also the knowledge graphs which are retrieved from ConceptNet for each word. In this manner, commonsense knowledge can be encoded in the model through graph representation techniques, and therefore, be used to facilitate inferring coherent endings. Integrating the context clues and commonsense knowledge, the model can generate more reasonable endings than state-of-the-art baselines.